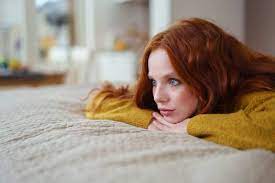 How to Care Less and Feel Better

They say September is the new January, filled with promise and a sense of new beginnings. I don’t know about you, but with back-to-school looming, I’m starting to feel a palpable buzz – a blend of nervous anticipation, excitement, and dread.

There is so much to do.

Have you ever heard the term ‘overcare?’ Well, it’s a thing, and I suffer from it. In fact, a lot of women do. My clients are overworked executive women just like me who are experiencing the same levels of stress and burnout in all areas of their lives. We care too much about too many things, big and small.

As soon as I set foot inside Costco, I’m bombarded by shelves adorned with back to school ‘must-haves’: trendy backpacks, bedazzled notebooks and a dizzying array of markers that promise hours of artistic fun for my little ones. Immediately, my mind fills with the onslaught of tasks I just have to get done – extracurricular activity registrations, that assessment for my son I’ve been avoiding, and of course, my own career, which is ramping up at the same pace as my parental duties.

It’s only the beginning of August and I’m starting to twitch. My compulsion to ‘get stuff done’ has officially been activated. This may be a humble brag, but I’m a notorious ‘doer.’ I am ‘gaspingly productive’, as Celeste Headlee refers to it in her book, “Do Nothing”. My sense of urgency has served me extremely well over the years, in both my personal and professional life. As a former Human Resources exec, my high-achieving DNA has resulted in promotions, pay raises, and a reputation as a trustworthy leader. As a former employer used to say to me, “When you need to get something done, give it to the busiest person.”

I paid the price for that badge of honour. It was a lie I told myself, a lie society told me. When did busy-ness become the new trend? The accepted status-quo? The inconvenient truth was that I cared too much about the wrong things. In 2015, I was carried away in a stretcher soon after being promoted to vice-president. I never said no to my boss. Like many women, I was obsessed with trying to prove myself. My emergency room medical diagnosis was loud and clear: burnout and anxiety.  It hardly phased me. For months afterwards, I ignored the doctors’ stern warning to slow down. I was overcome with the ‘disease to please’ and ‘no’ wasn’t an option, and for that I was lauded and admired at my job.

As the daughter of Italian immigrants, I grew up with an authoritarian father who worked 12–15-hour days as a bricklayer and a mother who cleaned motel rooms for a living. Let’s just say the ‘work hard and grin and bear it’ mentality became deeply impressed in the grooves of my Type-A brain. I can still hear my dad saying, “Teresa, if you want to earn respect at work, say yes to everything. If they ask you to work late, say yes. If they ask you to work a double shift, say yes”.

While I respect the origin of my father’s work ethic, the “yes mentality” cost me a great deal. I lost a sense of self-respect, self-compassion, and self-love. It cost me my own voice. Soon, the lines between ‘yes’ began to blur outside the office as well. Out of habit, I found myself saying yes to certain people, situations, and circumstances to whom I clearly should have said no. Situations to which I pray my daughter will say hell no. I learned at a very young age to put my needs last and others’ needs first. I learned that serving the needs of others – the bosses, the men, the children – was most important. What began at my very first job – Mcdonald’s – with the mindset that the customer is always right, eventually morphed into never learning how to speak up or express what I needed. In the end, that “just say yes” mindset led to the anxiety, stress, overwork and burnout that almost ended my career.

You can imagine my relief when I learned there’s actually a name for caring too much: overcare. Overcare, according to the HeartMath Institute, is “when we over-identify or when we excessively worry, or have anxiety about the object of our care.

According to the HeartMath Founder, Doc Childre, the signs of overcare include:

Overcare is easy to fall into because it convinces us the more we worry, the more we care. My enmeshed relationship between overcaring and worrying led me down a path of workaholism and near self-destruction.

What’s the solution? There’s a lot of unravelling of old beliefs and paradigms to do, but the new goal for me must be balance.

Balanced care renews. When I’m flexible and relaxed under pressure, when I’m honouring my intuition and instinct, I flow much more easily with the challenges that come my way. When I am in balanced care, I have more emotional stamina and increased access to solutions. Responding to problems comes a lot easier. I can say no.

Think of balanced care as an oil that lubricates the entire mental, emotional, and physical system. Running your system without care is like running your car without oil: You get friction and breakdown. It drains our system, and it doesn’t feel good. This has a cumulative effect and can lead to burnout and high pressure.

I rarely noticed when I crossed the line from balanced care into the draining, counterproductive state of overcare.  It can be subtle and comes with a lot of rationalization. “Oh, it’s nothing, I’ll do it right away.”

But it’s never nothing.

When I started to care less, my entire life and career began to truly change. I set boundaries at work; I say no more often. I say yes more often too — to myself. I left that corporate job and started my own business helping other high-achieving women overcome overcare and learn to balance over-achieving and success with self-preservation.

I can go to Costco later. The backpacks and pencil crayons can wait.